A Cozy Wedding at a Historic Castle in Transylvania with French, Asian, and Romanian Elements

Over The Moon: by SHAYNA SEID | PHOTOGRAPHY by WHITE RUFFLES PHOTOGRAPHY | PLANNING by BLAGA EVENTS

Silvia Tilea, who is Romanian, and David Hsu, who is from New York City, met in the City of Love, while they were doing their post-graduate studies and joined the same student club. After leaving Paris, she moved to the U.K. while he was in Germany. And after five years together, he proposed on a yacht in the middle of the Kotor Bay in Montenegro.

Once engaged, it wasn’t easy to settle on a destination for their July wedding, but they ultimately chose Silvia’s home country of Romania. With help from their planner, Alexandra of Blaga Events, they booked the historic Zabola Castle in Transylvania—an estate which belongs to one of the oldest Austro-Hungarian Royal families in the region and is still currently inhabited by Countess Mikes and her two sons.

The celebration kicked off with a traditional Romanian party on Friday. Highlights were the lamb roasted on a fire pit, the traditional Transylvanian dessert called Kurtos, the sour cherry liquor, and Silvia’s grandmother dancing with everyone to Romanian songs. Throughout the wedding, the couple wanted to incorporate the cultures they had experienced during their relationship. They served a croquembouche cake and had a traditional lavender toss, as an homage to France, and had Chinese parasols to reflect David’s Taiwanese heritage. Traditional Romanian clay pottery was also offered to guests as wedding favors.

On July 6th, 2019, Silvia wore two wedding dresses. The first was her mother’s custom, lace wedding gown, which she donned for the ceremony. “The bonus was no alterations at all were necessary!” she exclaims. For the reception, the bride changed into a strapless Carolina Herrera design. To pair with both looks, she wore a special-edition pair of Manolo Blahnik flats with pale blue buckles—her “something blue.” “As a surprise, David had the soles of my shoes engraved with love messages.”

She got ready with makeup artist Roxana Minea, and to complement the bride, bridesmaids wore Ted Baker dresses. The groom donned a Burberry tuxedo, and groomsmen looked put together in black suits with blush ties.

In front of a lake on the estate, Silvia walked down the aisle with her father to meet David under an arch of baby’s breath by Atelier Interesart. “I remember locking eyes with David through my veil, as I was walking towards him, and couldn’t help but smiling while also focusing on not tripping!” the bride says. After saying, “I do,” the newlyweds walked through their friends throwing lavender around them. They took a vintage Bentley to the reception venue to celebrate further. 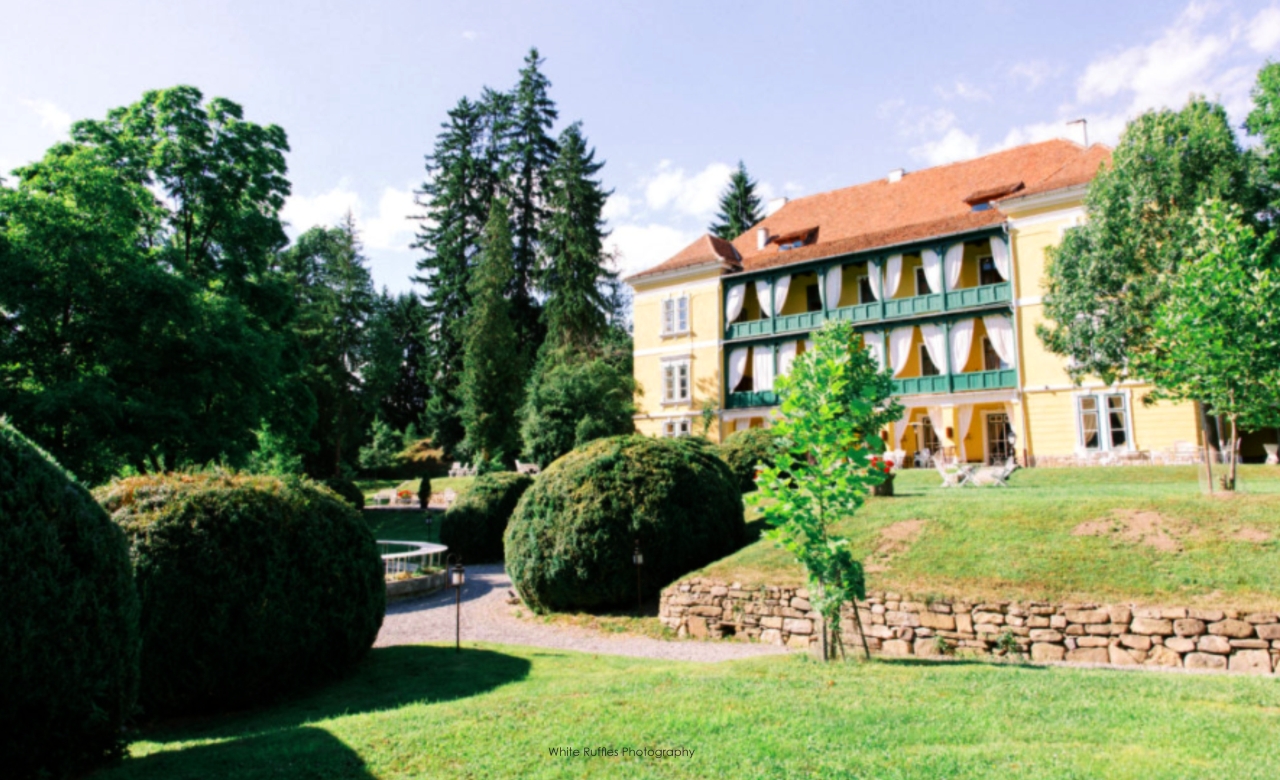 “Our main goal at the reception was to create a cozy atmosphere, making everyone feel like they were out at a dinner with friends on a warm summer night and to ensure that everyone was having a good time,” Silvia remarks. Baby’s breath hung above the long table set with hand-sewn personalized menus by Papira Design on delicate rose linens, and everyone sat on antique chairs borrowed from the homes of the nearby village.

Dinner was prepared by local Chef Oana Coanta of Bistro de l’Arte, who is passionate about enhancing traditional recipes and ingredients. Local perch filet, a pancake with aromatic herbs and a lemon sauce with tarragon and garlic butter, and duck confit baked in plum and bell pepper jam were served.

After the meal, Silvia and her father waltzed, followed by her and David’s first dance to “Tale As Old As Time” from Beauty and the Beast. “Even though we had well-rehearsed choreography, David and I took the liberty to improvise some of the steps in the heat of the moment, which actually made things more interesting and fun,” the bride remembers.

“The day culminated in a heated dance party on the outdoor rink surrounded by campfires and hundreds of candles,” Silvia says. The new Mr. and Mrs. left the venue at daybreak. “It was a dream wedding filled with love and joy, and I couldn’t have imagined a more fitting way to celebrate our love.”